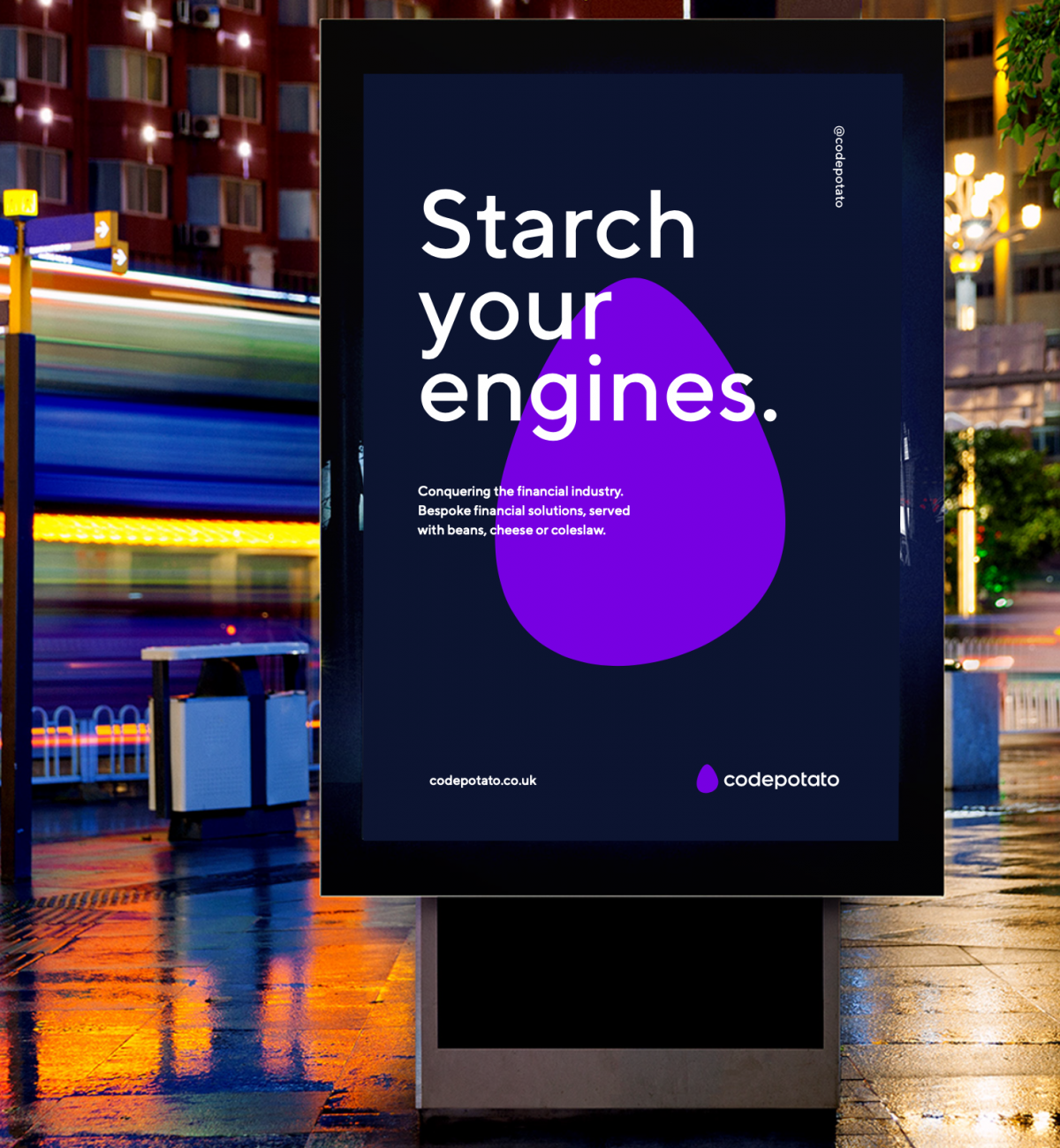 For the eagle-eyed amongst you you've probably noticed that things look a little different round here. Well, you're not still seeing things from over indulging in the festive booze, we've launched our new branding and a swanky new site to go with it.

You see, for a long long long long time, we've been really poor at explaining exactly what we do here at codepotato. For anyone who doesn't know us, we probably look like any old web agency that can churn out websites at a crazy pace. The fact is, we're quite a bit more than that.

Back in 2011 when we setup "properly" as a limited company that was exactly what we were known for, and it was exactly what we did. We designed and built marketing sites for fairly well known advisers that were quick to adopt twitter, mainly. We worked with incredibly forward thinking firms, not massive firms, just people who knew exactly what they wanted to get from the web. When we look back, we built so many sites it's just crazy. Fairly soon after launching one of the industry magazines ran a spread on the top thirty adviser sites and in that list six of them were ours! Those were awesome times full of coffee and dubstep music.

We knew we had more to offer. In 2012 we started to chat to businesses about something a bit more nerdy. Something more involved than just a standard marketing site with pretty animations. We noticed that for every five marketing sites we were building, we were getting the occasional nerdier request which we now aptly refer to as a data-driven development project.

In 2012 we started working with Primetime Retirement (not part of Key Retirement) and helped them establish their business online. They were a small team with an incredible product that had similarities to a fixed term annuity, but it wasn't. It was way smarter than that. We started learning new lingo; GAD rates, drawdown, PCLS and more. Our dreams at night were filled with formulas, PDF generation and custom business platforms - online. Before we knew it they had launched and we were integrating their platform into adviser tools like iPipeline and IRESS. In fact, we were now running the entire online business for Primetime. Every quote their business generated was powered by us. All in all, we powered over 773k quotes before they became part of the Key Retirement Group. For a small business, this is still one of our proudest achievements.

Things got nerdier and nerdier as time went on. Sure, we were still helping design, build and launch sites like Meaningful Money and loads more, but we were now building life insurance quotation platforms powered by realtime quote data from the likes of Synaptic and iPipeline. We were designing and building innovative employee benefit tools for corporate advisers in Edinburgh as well as tweeting about coffee and jazz.

We came to realise that we had a pretty unique setup where we could help companies in the financial industry innovate online and embrace the web as a platform for their business. Whether that was through integrating a few APIs or building a fully bespoke robo-advice service; we understood the nuances of the financial industry and spoke "the web".

If you fast forward to today, our website and branding has always been an evolving beast, cobbled together whenever we've had time to iterate it. Every time we rebuilt our site, the focus was always on marketing sites and not the more sophisticated stuff we've been doing since 2012. Until now.

We've had an agency-crush on the good folk over at Peekaboo for as long as we can remember and got in touch with them September 2019 to see if they could help us out. They helped us realise that we've always been proud to be a bit quirky (we have potato in our name, remember) and don't want to hide our personality but knew we could look a little stronger, perhaps a little more polished than previous attempts.

That's when they went away to sharpen their crayons, lubricate their minds with copious amounts of coffee and came back with our new branding.

We cannot thank Brett, Sam and the other cool cats at Peekaboo enough for their creativity with our new branding and highly recommend anyone looking for a bit of a branding love to get in touch with them. You won't be disappointed, they rock! 🤘

With the new branding in place, we cracked on with designing the site you see today and finally, after 8 years we're shining some light on the amazing data-driven tools we've been lucky enough to build with our clients.

We're super excited for the next chapter (without being too gushy) so for now we'll let you absorb all the cool vibes from our lush new colour-scheme and perhaps explore our site a little?

As ever, tonnes of spud-love to you all,

-- Gareth and the codepotato gang